Deadpool (by ReillyBrown on DeviantArt) never seems to take bodily injury or even death seriously.

So last time I was talking about why Deadpool is NOT a hero.  No where does he fit the description of a typical action hero.  So does this mean he’s an anti-hero.  Lets look at that definition.

a protagonist who lacks the attributes that make a heroic figure,as nobility of mind and spirit, a life or attitude marked by action or purpose, and the like.

a protagonist of a drama or narrative who is notably lacking in heroic qualities. This type of character has appeared in literature since the time of the Greek dramatists and can be found in the literary works of all nations. Examples include the title charactersof Miguel de Cervantes’s Don Quixote (Part I, 1605; Part II, 1615) and Henry Fielding’s Tom Jones (1749). Some examples of the modern, postwar antihero, as defined by the Angry Young Men,include Joe Lampton, in John Braine’s Room at the Top (1957),and Arthur Seaton, in Alan Sillitoe’s Saturday Night and Sunday Morning (1958).

From the beginning of his series, its been established that Deadpool’s first priority in anything is himself.  He joined the military, not out of a sense of duty or patriotism, but simply for the money.  He later volunteers for the Weapon X program simply to try and save himself from cancer.  (As he notes himself in one of the later issues of Cable & Deadpool all origin continuity depends on which writer you prefer, this is the version I think makes the most sense.)  Like a lot of us, he’s made bad decisions compounded by worse decisions.  He has a hard time figuring out what the ‘right’ thing is and then doing it.  Sometimes, his reactions to events are simply that, reactionary and while on the surface seem heroic, it was never his intention to be heroic.  Then other times he’s desperately trying to be what he thinks of as heroic, which rarely works out well for anyone involved.

Cable tries repeatedly to help him rise above his self-inflicted mediocrity.  It has rather mixed and questionable results. After a very public and very messy break up with Cable, Deadpool kidnaps Taskmaster who is a renowned mercenary in order to prove that he’s still a kick ass merc.  After their fight and the failure of Deadpool’s plan this is what Taskmaster says to him: 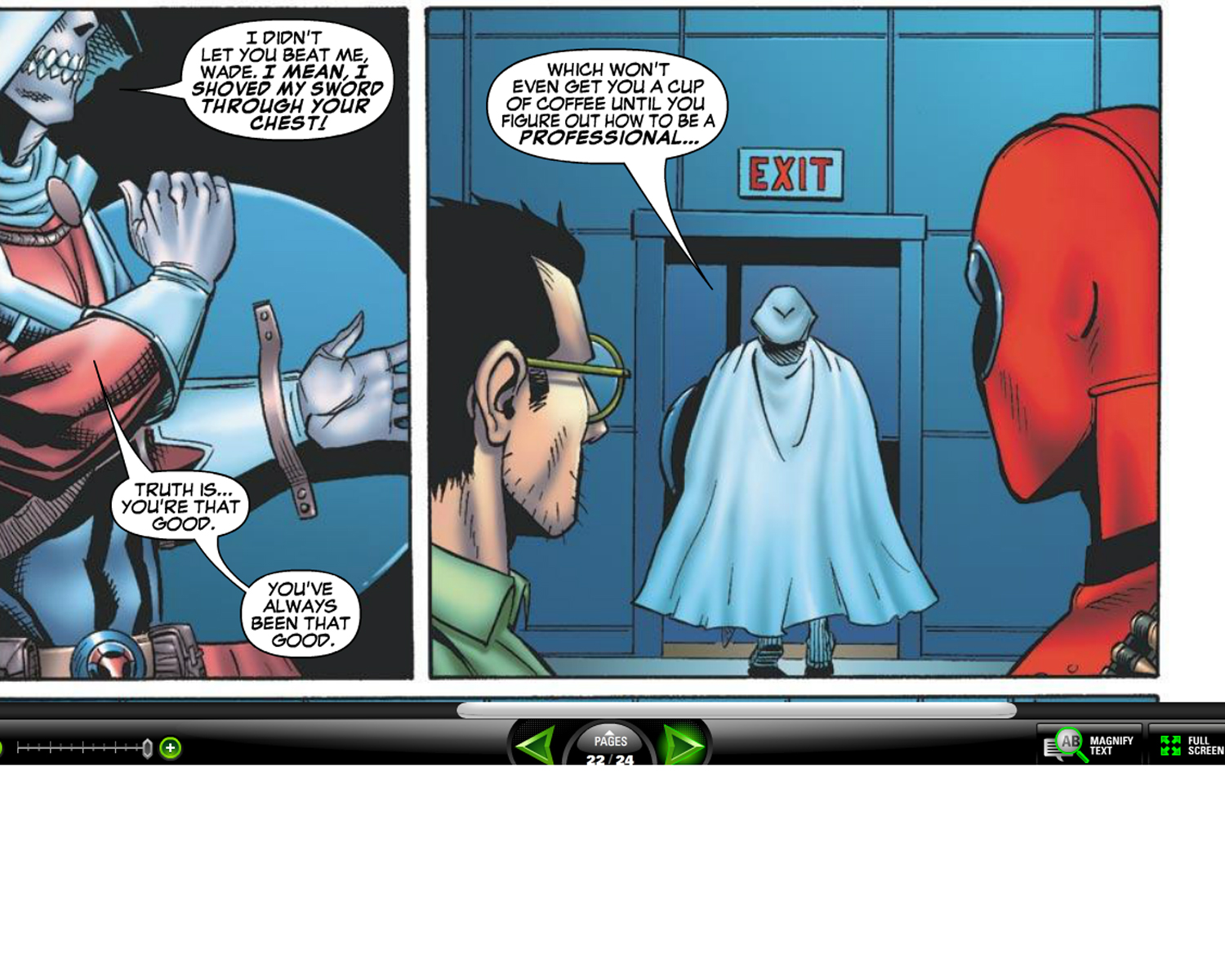 Ouch, buuuurn.  But therein lines the crux of the problem.  Deadpool has no idea what he’s doing.  He’s highly trained and extremely dangerous but completely unfocused.  He basically just does whatever strikes his fancy.  So . . . that leads us to the next topic.  Is he a villain?

1: villein
2: an uncouth person : boor
3: a deliberate scoundrel or criminal
4: a character in a story or play who opposes the hero
5: one blamed for a particular evil or difficulty <automation as the villain in job … displacement — M. H. Goldberg>

While most everyone who knows Deadpool say’s he’s an idiot most understand that he’s not a complete reprobate.  He doesn’t like killing innocents or causing undo mischief without reason(reason being money).  At one point he lost his hired gun job with King Pin because he chose to save innocent bystanders rather than taking the opportunity to kill Bullseye.  So does that mean he’s an anti-villain?
TVtropes.org has this to say about anti-villains.  “The Anti-Villain is a villain with heroic goals, personality traits, and virtues. Their desired ends are good, but their means of getting there are evil. Alternatively, their desired ends are evil, but they are far more ethical or moral than most villains and they thus use fairly benign means to achieve it, and can be downright heroic on occasion. They reach a kind of critical mass that makes them more good than normal villains but not quite heroes, blurring the line between hero and villain the same way an Anti-Hero does.

Anti-Villain is an attempt to humanize, to lighten up, a villain as opposed to Anti-Hero, which has a tendency to darken the hero. Side by side, it can become hard to tell them apart. The only reason some would even be considered evil at all is because they’re the Designated Villain. Despite this humanizing characterization, they are rarely less dangerous; heroes won’t know what to expect when their enemy offers cookies and then attacks their reputation, without giving them an excuse to rationalize killing them.

They are probably well aware that what they’re doing is “evil”, unlike the blinded Knight Templar, but strive to maintain a facade of good PR. They’ll see it as a viable means to a (possibly) good end.” (http://tvtropes.org/pmwiki/pmwiki.php/Main/AntiVillain)

So what do you think? Which camp does Deadpool fall into, if any?  Are there any other notable anti villains you can think of?