Gender bias is just that bias. 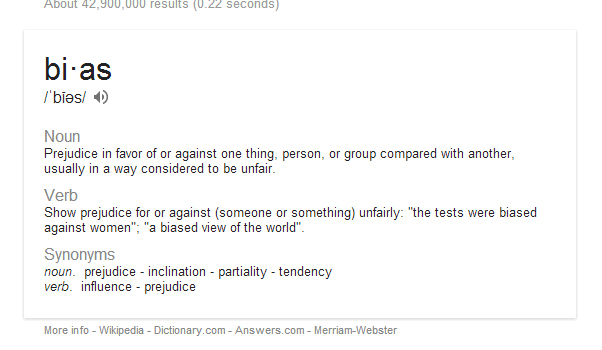 As recently brought out in the article Gender Dichotomy is a Fairy Tale We Have Been Telling Ourselves to Sleep at Night on The Mary Sue  Anika Torruella addresses the difference between being physically male or female and being mentally male or female.  Surprise, mentally there is little to no difference, other than things we are conditioned by society to think is gender appropriate.  She quotes a new study in the Journal of Personality and Social Psychology, “Men and Women Are From Earth: Examining the Latent Structure of Gender,” headed byBobbi J. Carothers and Harry T. Reis, who are from Washington University in St. Louis and the University of Rochester.  Their goal was to “provide empirical evidence that sex and gender are not the same thing.”

So what did they find?

‘122 unique indicators from 13 studies comprising 13,301 individuals provided later, Carothers and Reis point out “clear empirical evidence to support the belief of researchers who see psychological gender differences in dimensional terms”. In other words even among those with strong and unambiguous gender identities, men and women do not exhibit all the characteristics and behaviors expected of their sex and “may also display some of the characteristics and behaviors associated with the other sex.”’

So in other words when physical gender is ignored men and women are remarkably similar.

Well I could have told you that.  And so could James Roberts, writer of the IDW Publishing comic series Transformers: More than Meets the Eye.  He’s done a masterful job at writing physically gender-less characters while still allowing them to have multidimensional personalities that either gender could identify with.  This was beautifully illustrated in Issue #13 as I will explain in a bit.

When you have no gender and do not identify with either gender having someone try to fit you into one role or the other can be infuriating.  So why do we do it?  Why must things that ‘look’ male automatically be male and vice versa?  Can we not choose what we feel best represents our psyche.  For myself personally, I have never identified fully with either gender.  Intellectually, I know what biology says I am but that has never affected my self-perception.

I am going to use the comic I mentioned earlier to illustrate this point.   I’m going to use two of the characters in Issue #13.   First will be Whirl, second will be Ultra Magnus.  If you are unsure why I am using Transformers, its for the simple reason that they have no gender.  They are not male or female or anything in between.  They do not reproduce sexually (at least not in the established canon, fan fiction begs to differ).  They are giant, non-organic, intelligent life forms.  (For more on their interpersonal relationships see last week’s post.)

In issue #13 of IDW Publishing’s Transformers: More Than Meets the Eye the Autobots of the ship Lost Light are on shore leave on the planet Hedonia.  Being giant metal beings, they are not always welcome by the smaller organic beings who squish easily.  Sensitive to this, a few of them agree to adopt holomatter avatars in order to scout out locales where they will be welcome to come and unwind for a bit.  The program they install to adapt these avatars has been upgraded so that their avatar more closely represents their personalities.  Which makes sense because the risk for being misunderstood would jump considerably if you were uncomfortable with, or misrepresented by your avatar.

Probably the biggest shock to fans was the fact that the sometimes rather insane and violent Whirl had this for ‘his’ avatar. In case you are unfamiliar this is his actual form:

That’s right.  That bot that the Transformers wikia describes as  ‘ . . .a rather reckless fighter and can take damage because of it. He’s okay with that, because he absolutely LOVES his job . . .’ has what looks to be a preteen girl for an avatar.  A very tomboyish girl who obviously loves her weapons, but that’s Whirl.    Honestly, I love the fact that his avatar is so fun.  It’s obviously a perfect reflection of his personality, forget anything about it being a girl.  He didn’t choose this avatar.  The program, after analyzing his personality, chose it for him.

On the other hand we have Ultra Magnus.  He is first and foremost a soldier.  His loyalty and self-sacrifice are tempered by his reluctance to form close bonds with anyone.  That and his strict adherence to rules and regulations to the point of being obsessive compulsive.  Magnus chose his own avatar.   He chose the likeness of the one human he felt closest to who just happened to be female. Ultra Magnus is front and center of the cover looking quite sexy with his avatar.  (Love the power pose he’s got going on.)  Those who have followed the comics will recognize the woman.  For this post her identity is not important.  What is important is that Magnus respected her enough to want to use her likeness to represent himself.  He was not concerned that she was female.  I’d wager that thought never occurred to him.  To him she was simply a human he admired and called a friend.

Maybe They are on to Something

So why do we get so hung up on the male/female dichotomy?  Why does it matter so much in our daily interactions?  Why can’t we just see people as people instead of their gender?

It goes back to what I said in the beginning, we are conditioned to think this way.  We can, however, unlearn it.  And a good way to start is by realizing that just because I look a certain way doesn’t mean I’m going to behave a certain way.   Just like with the Transformers.