So, this past week I have rekindled an old flame . . .-er fandom.  I don’t know how many of you ever watched the original Tron (1982) but as a teen in the 90s I fell in love with the Grid and everything associated with it.  Jeff Bridges,  Bruce Boxleitner and Tron himself.  I was stoked when Tron: Legacy came out in 2010.  Loved it too.  Tron is still my favorite, though I’ve discovered a new attraction as well.  Rinzler. 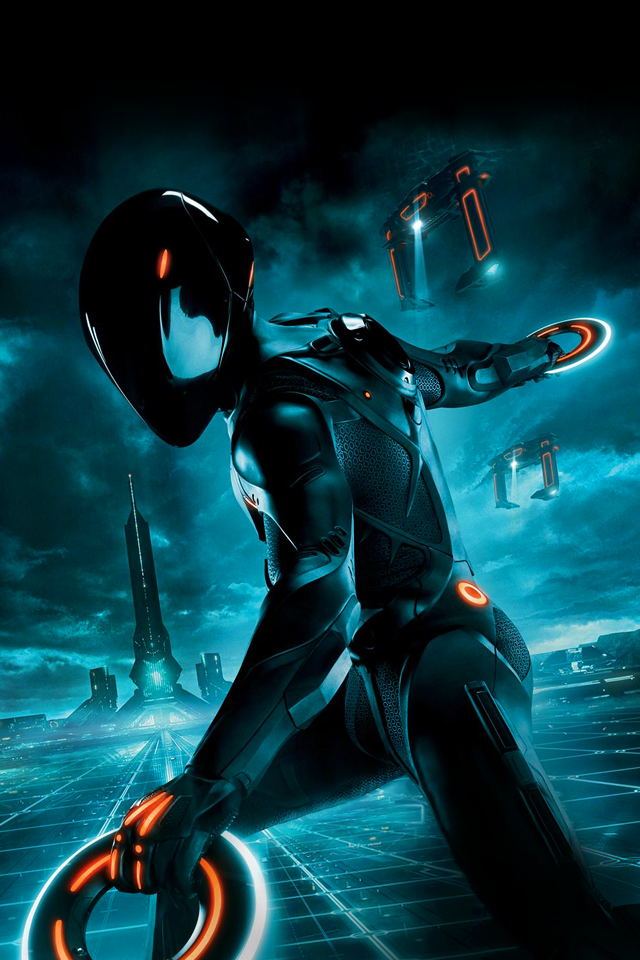 Rinzler, the deadly and silent enforcer of the Grid.

Yes, yes I know what you are thinking.  He’s the bad guy.  Again.   I can hear you rolling your eyes, stop it.  I’m sorry, well no I’m not, but I like antagonists okay.  And Rinzler is everything a really good bad guy should be.  Powerful, deadly, mysterious, intimidating yet with sparks of humanity glimmering through at times, oh and sexy as hell.  Yes I know you cannot see his face but my dear sweet Loki look at that body.

I’m getting distracted.  Just so you know it’s not all ‘dat ass with Rinzler.  Nope.  Ahem, so on to what I was originally going to talk about.  Also if you have not seen Legacy please read no further for here there be spoilers.

Rinzler first appears in the movie not too long after Sam enters the Grid and is sentenced to the Disc Games for being a stray program.

It was during this that I noticed something odd with Rinzler.  First he recognizes Sam as a user because of the blood and second there is a disturbingly familiar ‘t’ shape on his chest.  My fears are confirmed later when Flynn Sr. recognizes the security program.

Tron wasn’t killed by Clu he was  reprogrammed.

Oh the implications.  Tron would never have willingly followed Clu.  Reprogramming a complex and powerful security program would have been difficult.  And violent.  Stripping away core protocols, changing logic engines, replacing nearly everything that had made Tron what he was; a hero, a champion for programs and users alike.  This is what draws me to Rinzler, this inherent juxtaposition.  The hero is now the villain.  All his skill and beautifully designed functions have been twisted to meet Clu’s needs and wants.

Why do I find this so fascinating?  I’m not entirely sure.  A lot of it has to do with wanting to see the broken restored and the powerful broken.  Rinzler is powerful and broken.  Yet he is able to overcome at the very end and remain true to his core programming.  “I fight for the users.”  This is what we really want out of our heroes.  For them to remain true to their core beliefs no matter what happens to them.  I think it’s something we all hope we would do if so challenged, remain true to ourselves and our beliefs.

Something else I find fascinating is that Rinzler is able to overcome centuries of being  under Clu’s control once he’s given the chance.  Confronted with his first real challenge since being rectified he rejects what he’s held for so long.   He rejects Clu’s teachings of their previous enslavement by the users and realizes that it wasn’t the users who enslaved the programs, but Clu.    Clu himself is exactly what Kevin Flynn created.  A program to keep the operating system at peak function.  However Kevin didn’t realize that perfection is not sameness.  Perfection is doing one’s function at the highest possible capacity.  This oversight on his part lead to Clu’s rebellion, Tron’s ‘death’ and subsequent purge of the isomorphic algorithms.

We have all made mistakes, though hopefully none with such grave consequences.  That’s also what I love about this movie.  There are consequences to the character’s actions, real ones.  I dislike it when everything is all wrapped up in a tidy little bow at the end of a movie.  Bows can unravel with just the right tug but some people seem to forget this.  That is why I’m not a fan of the so-called happy ending either.  It’s unrealistic.  Yes, I know what you are thinking, we are discussing an alternate reality set inside a computer and I’m talking about realistic life scenarios.  But the setting is not the issue, the content is.

So, what do you want see out of a character?  Especially ones like Rinzler or Loki?  Defeat or redemption?